I know this can be done using MDT (Install Language Packs Offline), and even though I love the MDT integration features, I personally find it easier to do this from a run command line step during the WinPE part of my TS.

First Thing you need to do is create a Package containing the Language pack files.. The different language packs should be placed in folders corresponding to the actual language code, like this for Danish and Swedish.

Once the package is created (and placed on a DP), its time to add a couple of lines to the OS deployment TS:

1. Open your TS, and just after the “Apply Operating System”  Step, add a “Run Command Line” step with the following syntax: (to install Danish language pack)

– Notice that the drive letter of the disk where the OS I installed has been replaced with the variable OSDTargetSystemDrive. Its necessary to use the variable, as we can’t be sure which drive letter WinPE assigns to the primary partition. In the same way, the SchratchDir has been set to point to windows\TEMP. If this part is left out, DISM will attempt to unpack the language CAB to the X drive, which is in RAM, resulting in failure do to insufficient space. 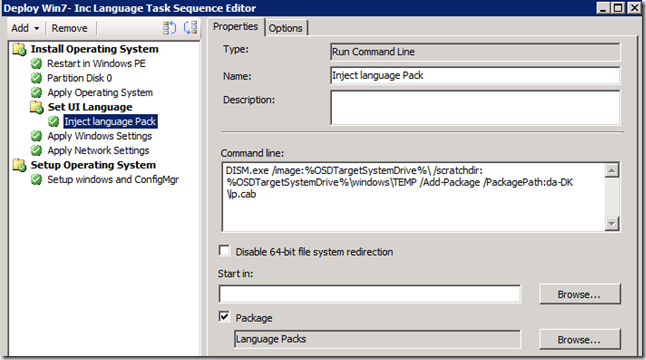 That’s it. Just remember to reference the language Package you created! In part 2 I will explain how to easily set the default UI language!