Today I had to create a Windows XP Driver package for a DELL OptiPlex 790 Desktop computer. The computer off cause had a new storage controller, so I obviously had to import the newest Intel storage drivers into ConfigMgr, and add a step to the Task Sequence to inject the controller driver during the WinPE phase.

Well ass you probably know, ConfigMgr can’t just inject all the available storage drivers and then let Windows XP figure out which one to use, like Windows 7 can. With XP you will have to choose the exact one to use, or you will end up with a BSOD!

I turned out that the one I needed to inject was the Intel(R) 6 Series/C200 Series Chipset Family 6 port Serial SATA AHCI Controller – 1C02 driver, so I went to the Apply Driver Package step, pointed to the newly imported storage drivers, and here I ran into a problem! The Intel 6 Series were nowhere to be found there were only some Intel 5 Series! drivers 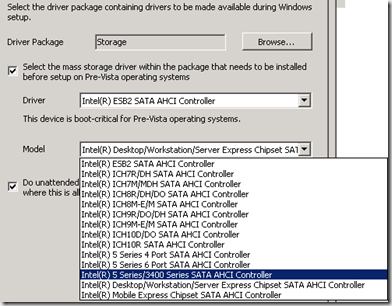 So what to do.. Well I ended up installing Windows 7 on the machine, with native drivers only (I knew it would work, as there were no problem accessing the Hard Disk from WinPE). I then updated the native storage driver, with the ones I imported into ConfigMgr, letting windows choose the best match. Once done, it turned out to be the Desktop/Workstation/Server Express Chipset SATA AHCI Controller. which, as I shows I the picture above, is in fact on of the drivers present in the package.

I then choose that driver in the “Apply Driver Package” step, and what do you know, it worked like a charm… I guess the conclusions must be: