While running a task sequence, info on what is happening is shown in the progress UI, well the name of the Task Sequence, and the step that is running anyway!!

But what if we could extend that info to let us know other things as well! Turns out that is as easy as typing a little extra text in the Task Sequence editor.

Let say you are administrating a large environment, doing several OSD tests against a number of MPs, and DPs. Now wouldn’t it be nice if we could actually see where data is picked up, right there on the screen during deployment.

Let go with the location of the OS image, which you would always want to pick up from the local DP!

First navigate to you image in the Operating System Images node in SCCM, and check the Image ID, here CEN00009

Open your Task Sequence, in edit mode. Highlight your Apply Operating System step, and change the name to include the OS image location variable %_SMSTSCEN00009%

That’s all there is to it. When you now run your TS the content of the variable shown in the progress UI like this

Same scenario as before, but now we would like to know which MP the client is installed against.  In this case we just need to change the name of the “Setup windows and ConfigMgr” step to include the variable &_SMSTSMP% like this: 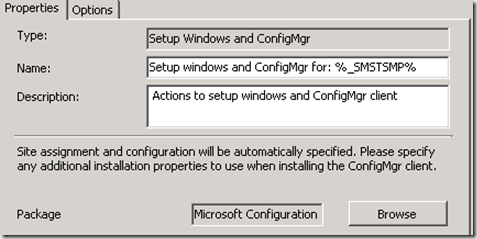 Which again would show this:

The only thing you need now is a list of all the available variables. To get that, just run the following .vbs script, and all variables will be added to SMSTS.log