I did a customer SP1 upgrade during the weekend, the process ran successfully according to the Setup UI, but when I later tried to update the boot images I received the following error:

Failed to insert OSD binaries into the WIM file

Another symptom of this problem is that when you open the properties for the boot images, the pane Optional components will show no items in either of the lists. 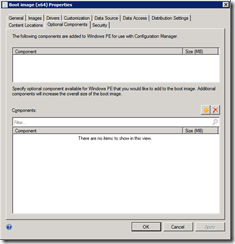 And finally you may also notice that the version number of the image is not 6.2.9200.16384 as it should be after the upgrade.

First I tried to simply create a new image, i.e. a MDT image. But I got the same error message.

Having read the reports of people having problems with building boot image, caused by McAfee AV. I started to look at the ForeFront setup on the server. I excluded the c:\windows\temp\bootimages and the osd\boot folders. I even tried excluding the dism.exe process. But all of this had no effect. So finally I uninstalled ForeFront completely.

And behold … suddenly I was able to build a new MDT boot image and it had the standard optional components. But I was still not able update the built-in boot images.

That was solved using a fix I got from Kent Agerlund, and it goes something like this:

Repeat the process for the x64 boot image.

This process was described by Clifton Hughes_MS on his blog, found here