The main idea with this HTA is to assist small and medium sized organizations with an easy way to implement a custom OSD solution without having any developer or HTML skills. The HTA solutions can be used when booting directly into WinPE and to prestage computers.

Why; You might ask, Why, do Coretech create this tool instead of using the built-in tools in Configuration Manager or using the UDI wizard in Microsoft Deployment Toolkit?  The answer is straight forward. We often run into customers who do not have the knowledge it takes to build custom solutions or use the UDI designer. Our Coretech HTA is intended to those administrators where OSD only plays a small part in their working life but never the less must have custom solution that works right out of the box.

- And hey Coretech dudes; why don’t you just use the MDT database and all the MDT features? Why do you spend time creating solutions that already exist “out there”? Well, because we are talking with multiple customers that are not OSD experts and just want to have a simple solution.

The main benefits of using the Coretech HTA is:

We control and configure most settings using variables on computer objects and collections. This method might be new to you, and will certainly require a new way of thinking.

The following requirements must be met before installing the HTA:

What the HTA is not

The HTA is not an Enterprise solution or a replacement for MDT.

What happens during the installation?

Files in the Bootimage folder:

Files in the Bootimage\Prestart folder:

RunHTA.exe maps the drive letter T to the HTA file share, and executes the RunHTA.vbs

RunHTA.vbs executes the HTA.exe main executable and waits for it to end.

Files in the Config folder:

Config.xml, the main configuration file containing information about the site server and the main OSD folder.

Logo.png, the top logo used in the HTA.

How to get started with the Coretech HTA solution

You are almost ready to use the solution as soon as the install is finished. Only a few details needs to be configured before you can deploy the very first image in your environment.

In theory the HTA is now ready for use (although you might want to customize the task sequence first).

Modify the default values in the HTA

The true value of the HTA is found in the simplicity when it comes to making changes. Changes like controlling the computer names, modifying the default values etc. All you need to know is the variable and the optional values. Below is the list of some of the values you can modify in the hta_main collection, after that are some examples that you might find useful.

The HTA is controlled by folders and collections. If you look at the main HTA you’ll notice two main buttons (Windows 7 and Windows 8), those correspond to the folders created in the Roles folder. By creating a new folder in Roles, you’ll automatically create a new main button in the image. 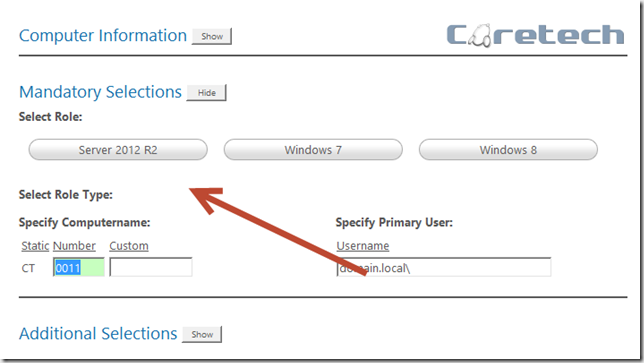 Once the role is selected, one or more role types are available. Those are controlled by the collections you have created in the role folder. In this example I have created 3 different Server 2012 R2 role types. 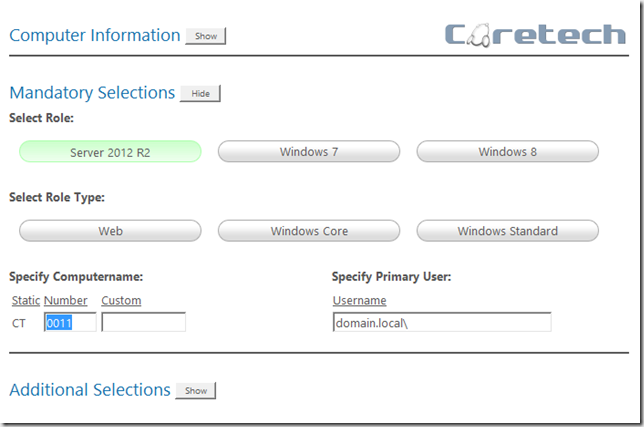 You can prestage computers by running the hta.vbs directly from the server. The only difference is that you will be prompted for a user name, password and a MAC address. Once you have entered those information you’ll be presented with the HTA from where you can configure the computer information. 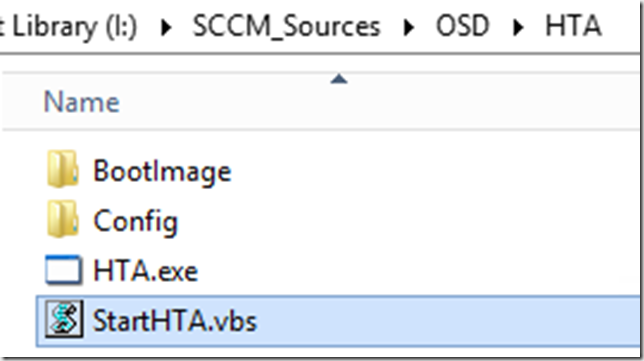 This blog post is meant to be an introduction that will give you enough information to get started with using the tool. The solution also contains other features, so stay tuned more information will follow.

This tool would never have existed if it wasn’t for my fantastic team of dedicated collegues, huge colleagues goes to both Jakob Svendsen (contributing developer) and Claus Codam (main developer).